"Marcel Rayman is executed by firing squad on 21st February 1944 at Fort Mont-Valérien. He is 21 years old.'The Red Poster' tells the story of this young, Jewish pacifist from Poland who took up arms against the heinous Nazi regime, alongside Missak Manouchian and other resistants in the FTP-MOI: a communist section of the French Resistance composed entirely of foreigners, fighting for France and 'liberté, egalité, fraternité' until their network was dismantled. Far from the glorious clichés, this innocent young man gradually becomes a seasoned warrior and a skilled strategist. Over the course of two gruelling years, during which his family are deported, Marcel Rayman becomes versed in underground resistance fighting, armed warfare, assaults, urban guerilla tactics, death, fear... and betrayal.It is his face which appears on the flaming 'Red Poster', a piece of propaganda spread by the occupying authorities, intended to discredit the actions of the Parisian Resistance." 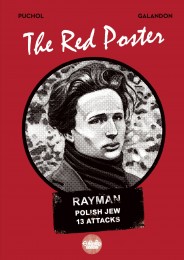 This is the story of Marcel Rayman, a young Polish Jew whose face is featured on the infamous 'Affiche Rouge', propaganda circulated in occupied France in an attempt to discredit the Parisian resistance. The Nazi abomination drove Rayman to set aside his pacifist principles and take up arms in the ranks of Missak Manoukian's resistance movement. For two long years, during which he saw his entire family deported, Marcel Rayman led a clandestine life, shrouded in death, fear and treachery.