"Whether it be artistic, amorous or revolutionary, passion resonates through this stunning work, tracing the complex and turbulent destiny of a young seminarian painter. This is Emmanuel Lepage's first work as a complete author. An exceptional success." 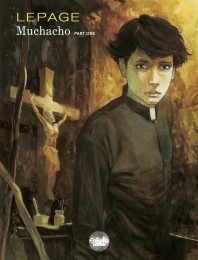 In 1976 Nicaragua "Tacit" Somoza rules the small Central American country with the support of the ruthless Guardia. The son of a powerful family from the capital, Managua, Gabriel is a young priest with an incredible talent for sacred art. He is sent to enhance his painting skills with Ruben, a priest in San Juan--a little village located at the base of a mountain. Despite his difficulty integrating with the villagers due to his father's reputation, Gabriel slowly gets to know them and, eventually, to love them. Encouraged by Ruben, he paints the villagers. He paints them as they are--men and women of flesh and blood. But Gabriel is soon witness to acts of military repression of the locals. It doesn't take long for him and the villagers to get swept away in these times of growing rebellion and smoldering revolution. Artistic passion, romantic passion, revolutionary passion. Passion courses though the pages of Muchacho, a two-part series. Here is part one. 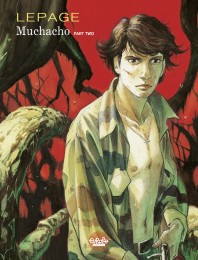 It's a time of grumbling rebellion and brooding revolution. Gabriel de la Serna, the teenage son of a well-to-do family, has gone into hiding. He fled, limping, into the forest. He had come to San Juan, a little village nestled in the mountains, to paint the Passion of the Christ. There he came to understand the passion of the villagers, the country folk, all victims of military repression. Nourished by a sense of divine justice, he begins to understand the villainy of those in power and their cronies. When he's eventually taken in and treated by the guerillas camped out in the forest, he lies about his family name and swaps his pencils and paint brushes for firearms. As he gazes beyond the surface and deeper into the depths, Gabriel also discovers his own humanity, made of flesh and desires...