Remove the sultans from their thrones! Mahmut has been given a top- secret mission to incite rebellion in the Dert Sultanluk in an effort to thwart their collusion with the Empire. They first head for Kuluch to search for pro-Torqye support, but upon arriving, they learn a shocking truth! Without a moment to spare, Mahmut’s resourcefulness and initiative are put to the test! 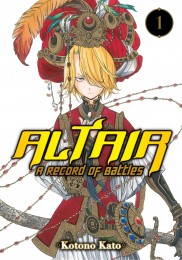 V1 Altair: A Record of Battles

For generations the Torqye Pashalu and the Balt-Rhein Empire have stood in stern opposition of each other. Then one night, when an Imperial minister is found assassinated, the two nations are plunged into a potentially explosive situation! As the generals of Torqye's council cry for war, Mahmut comes to discover the devious truth behind the assassination! Thus the young pasha's battle for his country, peace and trust in his fellow man begins! 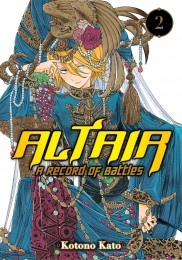 V2 Altair: A Record of Battles

After saving Ibrahim, liberator of Hisar, what awaits Mahmut is an unexpected decision! In order to foster his insight and strength, Mahmut departs on a journey, and along the way, he meets a fellow clansman by the name of Suleyman! The appearance of one who bears the same regrets and fury as Mahmut steels his resolve, and so, a new journey begins! 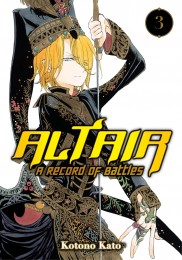 V3 Altair: A Record of Battles

Everything is for the sake of becoming a great pasha! Mahmut pays a visit to Phoinike, a crucial port town situated in the Centro ocean. However, what awaits him there is war with the Empire! If Phoinike falls, then Torqye will be in grave danger! And so, Mahmut endeavors to lead Phoinike to victory, however... The nerve-racking First Phoinike War is recorded in full here! 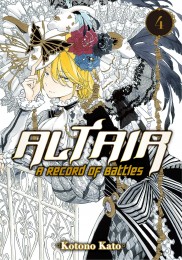 V4 Altair: A Record of Battles

Mahmut disembarks at the commercial city-state of Venedik! However, waiting for him in the opulent town of intermingling peoples are nothing but devious tricksters, his clash with whom puts Mahmut's resourcefulness as a politician to the test! Also included is Anastasia's Captain of the Guard, a one-shot awarded the Monthly Sirius Newcomer Award for its impressive polish. 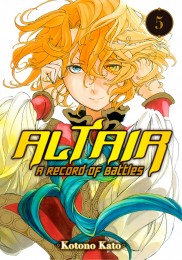 V5 Altair: A Record of Battles

Mahmut arrives in one of Torqye’s satellite nations, the Muzrak Sultanlu. However, little does he know that trouble stirs in the homeland! Despite sharing the same ancestry and having coexisted under the banner of Birlik Torqye for generations, the four-strong Dert Sultanluk rise in revolt against Torqye! And the ones behind their treachery are… As tension rise all around, Mahmut receives a callous order! 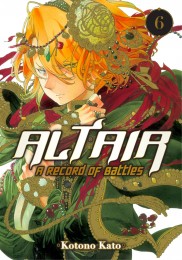 V6 Altair: A Record of Battles

Remove the sultans from their thrones! Mahmut has been given a top- secret mission to incite rebellion in the Dert Sultanluk in an effort to thwart their collusion with the Empire. They first head for Kuluch to search for pro-Torqye support, but upon arriving, they learn a shocking truth! Without a moment to spare, Mahmut’s resourcefulness and initiative are put to the test! 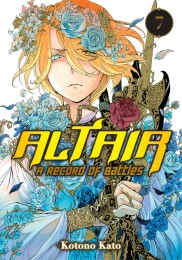 V7 Altair: A Record of Battles

At last, Mahmut and the Kuluch Sultanlu must face the three sultanluk’s combined forces, led by Sultan Balaban. With only 5,600 soldiers to Balaban’s 23,000, how can Mahmut possibly overcome such overwhelming odds?! Utilizing his tactical prowess, Mahmut heads to the frontlines equipped with a plan that will hopefully turn the tides of this monumental battle! And so, the Dert Sultanluk arc reaches its finale. 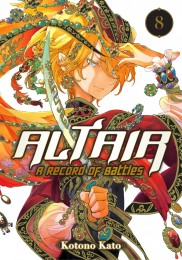 V8 Altair: A Record of Battles

Thwart the Balt-Rhein Empires invasion of Torqye! With the Pashalu’s forces crippled in the wake the Dert Sultanluk’s rebellion, an attack by the Empire could prove disastrous! In an effort to stand against the Empire through the power of commerce, Mahmut makes his way to the mercantile metropolis of Argyros. There, he encounters Niki, a young girl whose livelihood as a merchant is in jeopardy following the death of her father. How could Mahmut possibly plan to steal the Empire’s influence and give Torqye the upper hand without the use of weapons? Watch as his quick wit and tactical genius works miracles! 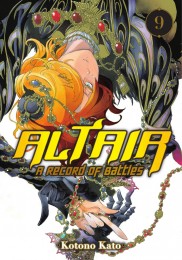 V9 Altair: A Record of Battles

After successfully pitting Vendik and Balt-Rhein against each other, Mahmut journeys to the northern Kingdom of Urado in other to futher bolster Torqye's blockade agains their would-be Imperial invaders. Horwever, the lifelong isolationists pay no heed to the Golden Eagle's call to arms. Once more, Mahmut's insight and negotiation skills are put to the test. Can he thaw the king's frigid heart and bring a new ally into the fold?! 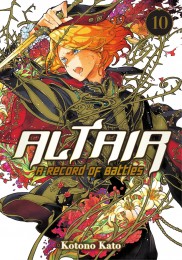 V10 Altair: A Record of Battles

Utilizing the full scope of his diplomatic dexterity, Mahmut manages to seal an alliance with the Kingdom of Urado. However, trouble soon rears its ugly head when the Empire marches on the Duchy of Scoglio! At last, the long-feared Great Rumeriana War begins. In order to stand against Balt-Rhein, an anti-Imperial tripartite alliance is formed between Birlik Torqye, Venedik, and Urado, and without a moment to spare, Mahmut makes for the Heart of Rumeriana to recruit more who would stand with them! Weather the storm and reign supreme, Mahmut! 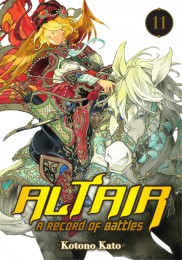 V11 Altair: A Record of Battles

In a fevered effort to rally allies and thwart the Empire's advance, Mahmut continues his campaign south to the mercenary metropolis of Tauro! The city's seasoned soldiers would bolster the Tripartite's force tremendously. However, if Mahmut is to win over Tauro's twin mayors, he must first defeat them in a perilous mock battle! Wielding his wit and military finesse, can the Golden Eagle break the Bull?! 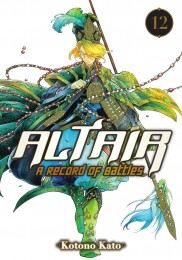 V12 Altair: A Record of Battles

Campana, the city of bells, has fallen! As nations buckle to the Empire one after another, Mahmut races to complete the Anti-Imperial alliance. His next stop: the heavenly sanctuary of Cielo, built atop a perilous peak! There, the Alliance finally makes their stand when the Imperial Army and Halil Pasha's expeditionary force collide! Harboring tens of thousands of refugees within the citadel, how will Mahmut pull Cielo back from the edge?! 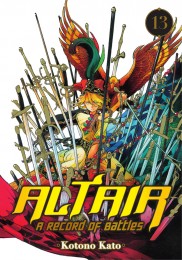 V13 Altair: A Record of Battles

The stage for the Great Rumeriana War shifts to the sea! Battle-ready and with Doge Lucio at the helm, the newly renovated Venediken armada sets sail to the Phoinike-Tharros channel to put an end to the Empire's blockade! Standing in their way: Balt-Rhein's allied fleet led by Amadeo of L'isolani, a man blessed by the god of the seas. When the Queen of Centro and the Children of Neptune collide, a historical naval battle unfolds that will decide once and for all who is truly worthy to rule the seas! 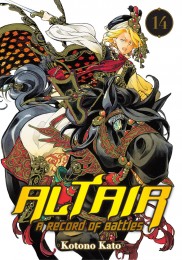 V14 Altair: A Record of Battles

Just when General Pineau's forces have the Torqyeli army surrounded, primed to crush them once and for all, Mahmut launches a brilliant counteroffensive that instantly turns the tide of battle, and turns the would-be pursuers ... into the pursued. As the dramatic turnabout unfolds and the victor is decided at last, what sort of thoughts linger in the minds of Pineau, Kokoschka, and Mahmut? 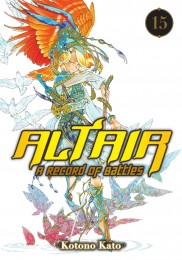 V15 Altair: A Record of Battles

The land of Cielo is now Torqye's first satellite territory! Following the Imperial fleet's defeat in L'isolani at the hands of Venedik commander Lucio, Mahmut's victory in Cielo once again sets the gears of history in motion. With Balt-Rhein left licking its wounds, Zaganos advances his forces in hopes of injecting his "poison" into Imperial lands! His next stop: the Empier vassal of Printemps, where he hopes to knock Balt-Rhein's legs out from under them! 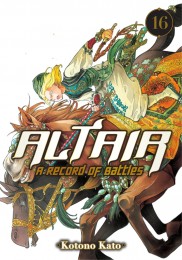 V16 Altair: A Record of Battles

As Mahmut hears word of suspicious Balt-Rhein activity, the Empire's southern forces begin their march back home. Their mission: To intercept Zaganos' army (busy freeing the tiny kingdoms that existed before the Empire's advance) in the city of Religione! To protect Zaganos from this sneak attack, Mahmut leads his own forces -- an army of cavalrymen, ready to show the Empire what it means to rile a people who live and die on the saddle! 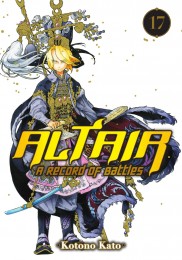 V17 Altair: A Record of Battles

Thanks to Mahmut, Torqye's main force has avoided a confrontation with the southern Imperial army. The Rhein region is in the hands of Zaganos, and as Torqye gains the advantage, his hands are already on the throat of Balt-Rhein! But a generals' conference portends serious changes for Mahmud's life -- and soon he realizes this isn't a war against the Empire, but a struggle for the future of his own homeland! 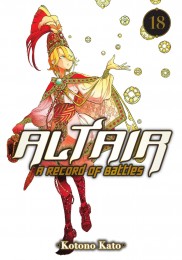 V18 Altair: A Record of Battles

After saving Zaganos’ army from a clash with the Empire’s southern forces, Mahmut is appointed vice-general taking orders from Zaganos—a de-facto demotion. Torqye's cannons give them a superior advantage against the enemy's fortified walls, but already Mahmut must face the internal power struggles facing his homeland after the war is over. Within Balt-Rhein, the Lelederik family hatches a plot as the newer Hermann nobility come forward as a force—and meanwhile, over in Phoinike, a symbol that has stood strong for over 3,000 years is about to be crushed. 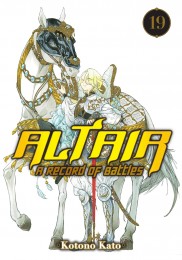 V19 Altair: A Record of Battles

Through the use of their “warning bell” cannons, the Zaganos force has finally brought their blades to Muhl, the very throat of the Balt-Rhein Empire. With the fate of the Empire in the balance, the Hermann—the group of younger nobility whose allegiances lie with the emperor—plunge into battle. Awaiting relief from Lelederik’s team of 4,000 heavy cavalry, they offer themselves as a lure on the battlefield. When the sun rises at the end of battle, who will reign supreme—Torqye, or Balt-Rhein?! 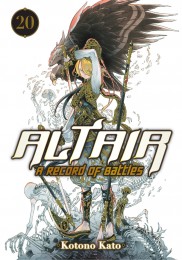 V20 Altair: A Record of Battles

With his "Warning Bell" cannons, Zaganos' forces have finally brought the Balt-Rhein Empire's stronghold of Muhl to its knees. But instead of reinforcing Muhl as expected, the 44,000-strong army led by Duchess Lelederik stages a march at breakneck speed for Altun, the capital of Torqye! Even with the forces of four sultanates blocking their path, Altun's hard-to-defend position spells doom for the nation if the enemy reaches it. Can Torqye's allies withstand this brutal attack, or will Lelederik have the last laugh?