What do the world's greatest heroes do when there's No One Left to Fight? They've saved the world countless times, growing up together and growing apart in the process. But now, with adulthood tightening its grip, they're forced to reconcile their regrets and resentments, coming to terms with the lives they've chosen. Inspired by the legendary Dragon Ball, critically-acclaimed creators Aubrey Sitterson (The Comic Book Story of Professional Wrestling, G.I. Joe) & Fico Ossio (Spider-Man, Revolution) invite you on an action-packed journey through their expansive new world. Fans of Hellboy, Umbrella Academy, and Black Hammer won't want to miss this exciting new vision of what genre comics can accomplish. Collects No One Left to Fight #1-#5. 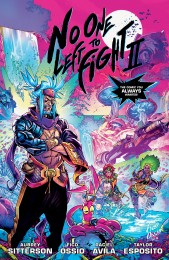 V2 No One Left to Fight

The smash-hit, critically acclaimed series returns, with the world's greatest fighter struggling to find his place after all his battles have been won and while there's still time left. Taking inspiration from Dragon Ball, Naruto, One Punch Man, and other fight manga, creators Aubrey Sitterson (Savage Hearts, The Comic Book Story of Professional Wrestling) & Fico Ossio (Mister Miracle, Spider-Man) welcome you back to the Next Great Dark Horse Universe. Collecting the world-shattering series No One Left To Fight II #1–5!