The hit Netflix series from the Duffer Brothers is now a spine- tingling comic that recounts Will Beyers' harrowing survival in the treacherous Upside Down! When Will Byers finds himself in the Upside Down, an impossible dark parody of his own world, he's understandably frightened. But that's nothing compared with the fear that takes hold when he realizes what's in that world with him! Follow Will's struggle through the season one events of the hit Netflix show Stranger Things! Written by Jody Houser (Mother Panic, Faith) and illustrated by Stefano Martino (Doctor Who, Catwoman) 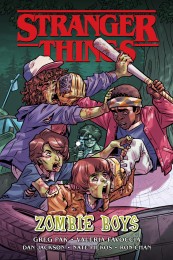 Following the events of season one of Netflix's pop-culture sensation Stranger Things, our main characters struggle with returning to normal life after overcoming supernatural horror. School is back in session in the normally quiet town of Hawkins, Indiana. Mike, Lucas, Dustin, and Will are still grappling with the traumatic encounters with the Demogorgon and the Upside Down in season one of the hit Netflix series. As tensions rise and fractures begin to form in the group, a new kid shows up to AV club with a Betamax Camcorder and an idea. The new Spielberg-wannabe friend, Joey Kim, wants to make a horror movie about a local legend, but when he sees Will's drawings, he discovers that his new friends are local legends. Written by best-selling author Greg Pak (Mech Cadet Yu, The Incredible Hulk, Star Wars: Age of Rebellion) and drawn by Valeria Favoccia (Assassin Creed: Reflections, Doctor Who: The Tenth Doctor). 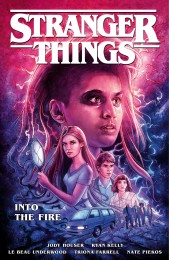 Beyond Hawkins Lab, Starcourt Mall, Dungeons and Dragons, Monsters, and Mindflayers, the powerful children that have escaped from Hawkins Lab are out in the world, trying to live normal lives, but it comes at a steep cost. Nine was left behind in Hawkins Lab, comatose and alone. Now she lives in a fractured reality of her own creation under the watchful eyes of doctors who have no idea about the psychic volcano building insider her that erupt at any moment, obliterating their entire hospital. Three and Nine's twin sister both escaped Hawkins lab several years ago and have been on the run ever since. They had just settled down into a new life when, all of the sudden, the lab has made the national news. With the veil of normalcy completely shattered, they pack everything they have and hit the road, hoping to find and help any of the other kids they can. When Kali (number Eight) informs them that Nine is still alive it becomes a race against the clock to save a beloved sister, from the doctors that keep her, as well as the delusions that threaten to fracture her psyche beyond repair. Perfectly penned by writer Jody Houser (Critical Role, Star Wars: Tie Fighter) with kinetic pencils by Ryan Kelly (New York Four, Star Wars) and tight inks by Le Beau Underwood (Catwoman, Immortal Hulk) this third book in the Stranger Things comics line takes the story to brand new territory. Collects Stranger Things: Into the Fire #1-#4. 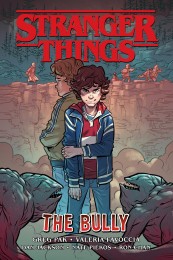 The bullies from season one of hit Netflix series try to uncover the mystery of Eleven's psychic powers in this scary all-ages comic! Troy has been having nightmares about El ever since she embarrassed him in front of the school and broke his arm in season one. Powerless and anxious, Troy is determined to prove that what happened between him and El is only some form of trickery. That is until he and James encounter demodogs! Written by best-selling author Greg Pak (Mech Cadet Yu, The Incredible Hulk, Star Wars: Age of Rebellion) and drawn by Valeria Favoccia (Assassin Creed: Reflections, Doctor Who: The Tenth Doctor). 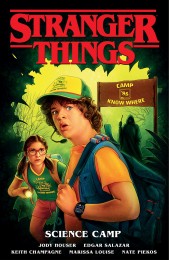 The comics based on the hit Netflix series delve into B-movie horror nostalgia when Dustin goes to summer camp, confronts a sinister figure in an Albert Einstein mask, and joins forces with Suzie to solve mysterious disappearances. Dustin arrives at Camp Know Where to navigate the new social hierarchy without the support of his Hawkins adventuring party. While also faced with nerdy bullies, a new menace haunts the young scientists and camp counselors. A mysterious figure with sinister intent arrives to disrupt the serene woodland scene. When camp counselors start to disappear, the solution won't take rocket science, but Dustin will have to get on the same wavelength as Suzie and the other campers before tensions reach a boiling point. Writer Jody Houser (Critical Role, Stranger Things: Into the Fire) returns with Edgar Salazar and Keith Champagne (Stranger Things: SIX) to create a new miniseries in the Stranger Things universe, taking place between seasons two and three of the hit Netflix show. Collects Stranger Things: Science Camp #1-#4. 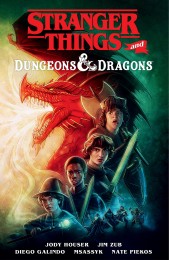 Follow the crew from Hawkins, Indiana, as they discover the legendary monsters and epic adventures of the Dungeons & Dragons tabletop role- playing game together. Long before the dreaded Demogorgon took one of them to the Upside Down, watch Mike, Lucas, and Will bond with Dustin for the first time over the game that would define their childhood. See the party come together as a team through communal stories and perilous quests to learn important lessons about friendship and find the courage to stand up to the bullies that challenge their everyday. Written by comics and RPG all-stars Jim Zub (Rick and Morty vs. D&D, Conan: Serpent War, Dungeons & Dragons: Infernal Tides) and Jody Houser (Critical Role: Vox Machina, Stranger Things, Star Wars), with vorpal-sharp line art from rising talent Diego Galindo (Power Rangers, Kino) and eye-popping colors from MsassyK (Isola) that strike as true as a Magic Missile. Dive into this love letter to a game that has defined role-playing through the lens of your current favorite icons of eighties nostalgia. 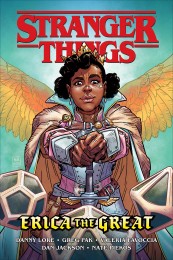 In this Middle Grade foray into the 80's-nostalgia hit series from Netflix, when Erica's frenemy loses track of her mother's prized Parakeet, the two will have to work together to return the bird safe and sound, or deal with the consequences. They learn that even the toughest and smartest people need a little help now and then. Hawkins Indiana has been plagued by strange events for years now. With the Starcourt Mall's recent destruction, Erica has lost her favorite hangout spot and her "free Ice cream for life" deal at Scoops-Ahoy. To make matters worse, her brother is too busy for her and her mom won't let her play Dungeons and Dragons anymore. This is the story of an ambitious, bossy, brilliant ten-year-old dealing with boredom and the complexities of maintaining friendships through tough times. Written by Greg Pak (Stranger Things: Zombie Boys, Stranger Things: The Bully, Ronin Island) and Danny Lore (Queen of Bad Dreams, James Bond) with art by Valeria Favoccia (Stranger Things: Zombie Boys, Assassin's Creed), colors by Dan Jackson, and letters by Nate Piekos. 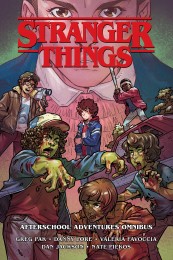 Collecting three exciting standalone stories from the world of Stranger Things, this book is the perfect gift for any young fan of the hit Netflix series. Collects Zombie Boys, The Bully, and Erika the Great. "Stranger Things is a must-read for fans of the show as it works to answer questions burning in the hearts of the most dedicated." –Comic Watch 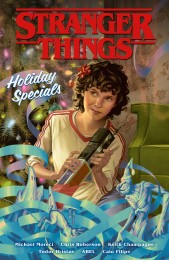 Get the first three Stranger Things Holiday Specials all in one package. With stories that are both heartwarming and terrifying. Three separate stories good for any season: Eleven gets introduced to everyones favorite Christmas stories. Will tells the other boys the scariest Hawkins Halloween story ever, and officers Powell and Callahan investigate strange events they will be lucky to survive. Collects the Halloween Special, Winter Special, and Summer Special! 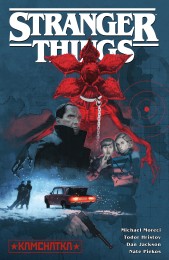 When a leading Soviet scientist is brought in to work on a top-secret project, he comes face-to-face with the new ultimate weapon—a Demogorgon! When he tries to sabotage the project, his two kids go on the run with a double agent. The ultimate weapon may be more than the Soviets bargained for . . . Collects issues #1-#4 of the miniseries.