With the reality of his situation now almost preternaturally clear to Dre, there is only one possible course of action... he needs to get away from Abstergo. With no clue how to do this, he lets his instincts take over, and finds that he has hidden depths he never knew of... and skills he couldn't have imagined! 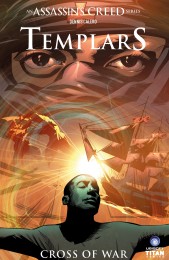 All-new adventures from the world of Assassin’s Creed! Discover a startling new perspective on the centuries-spanning conflict between the Templars and the Assassins – including the revelation of secrets hidden for a hundred years! Acting as a one-man agent of morality, The Black Cross stands as a guardian of Templars ideals, answering only to the Elders of the Order, and ensuring the sect’s ancient beliefs are upheld. With sinister agents emerging within the ranks and The Black Cross all but forgotten, Master Templar Juhani Otso Berg has set his sights on tracing the history of the mysterious figure in the hopes of bringing stability to the Order. Collects Assassin’s Creed: Templars #6-9. “Leaves the reader curious and wanting more!” – Flickering Myth