Join us for this game-changing new chapter in the ongoing Assassin’s Creed saga! With the Phoenix Project nearing its completion, tensions are running high for both the Brotherhood and the Templar Order. A new world order is on the horizon and only Charlotte and her new allies have the knowledge and skill to save humanity from subjugation. Meanwhile, after discovering a rebel faction within his order, Templar agent, Otso Berg begins to question his loyalties. 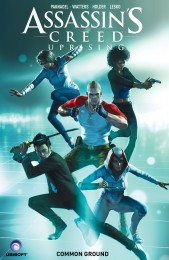 Tensions are running high for the Assassin Brotherhood and the Templar Order. A new global threat is emerging, one that threatens to quash both factions. Only by working together with an enigmatic Templar enforcer will Charlotte and her Assassin allies have the skills to thwart their own destruction. From Paknadel, Watters and Holder comes a game-changing new chapter in the ongoing Assassin’s Creed saga. Collects Assassin’s Creed: Uprising #1-4 “A very good beginning for Paknadel, Watters and Crew. It’s right on the money, and worth yours!” – Bleeding Cool “A compelling story that gives a dose of suspense on every turn!” – Multiversity Comics “If you’re an Assassin’s Creed fan, you should really pick this book up!” – Comics: The Gathering