AS DOCTOR WHO SEASON 8 HITS TV, DON’T MISS THE STUNNING DEBUT OF THE TWELFTH DOCTOR’S ALL-NEW COMICS ADVENTURES! New Doctor! New Beginning! Offering shocks, surprises, and timestream-shaking revelations, don’t miss your chance to get on board this amazing ongoing series! Eagle award-winning writer Robbie Morrison (Drowntown, The Authority, 2000AD, Nikolai Dante) dives headfirst into the TARDIS console room and spins the Doctor off to his most challenging destination yet!With the amazing storyline and fantastic interior artist under lock and key at the time of going to press – keep an eye on doctorwho.tv, titan-comics.com and the official BBC Doctor Who Facebook page for the official announcements! Retailers – celebrate the arrival of the newest Doctor with a selection of stunning variant covers – including a beautiful new painting from Alice X. Zhang!Doctor Who, the Daleks, the Cybermen, TARDIS and all other characters and logos are trade marks of the BBC and are used under licence unless otherwise indicated. 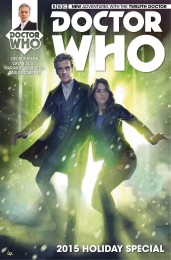 V16 Doctor Who: The Twelfth Doctor

It's the 2015 Doctor Who Holiday Special! When a mysterious Christmas card materializes on the TARDIS console, Clara and the Doctor are pulled into an interdimensional adventure of astoundingly festive proportions! Packed with impossible sights and nigh-insurmountable stakes, this special issue also contains puzzles and games woven into the story! 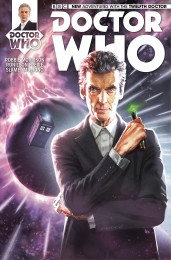 V14 Doctor Who: The Twelfth Doctor

THE STARS GO OUT, ONE BY ONE! It's the penultimate part of 'The Hyperion War', and things are looking bad for the Doctor and Clara! With the returning Hyperions having laid waste to whole portions of the Earth, the Doctor attempts to regain the initiative by moving the battleground into space, aboard the Hyperions orbital armada... But these ancient solar entities are building a superweapon around the sun - and eternal darkness could be the result! 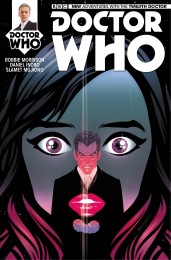 V13 Doctor Who: The Twelfth Doctor

THE FOUR-PART EPIC FIRST-YEAR FINALE CONTINUES! Earth is under attack from an ancient species who yoked suns and spanned galaxies before we’d even evolved opposable thumbs. Cities are tumbling under their assault, people are dying in droves… and only two people in the universe can save us. But first the Doctor and Clara must save themselves! Burning with fury forged in the heart of stars, armed with technology beyond human comprehension, composed of a fleet of unstoppable warships… the Hyperions have returned at last. Welcome to the Hyperion War…Welcome to the last days of Earth! 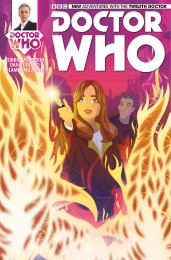 V12 Doctor Who: The Twelfth Doctor

THE FOUR-PART EPIC FIRST-YEAR FINALE BEGINS HERE! It took everything the Doctor had to defeat a SINGLE Hyperion – a mad and ancient living star that had been sealed away for millennia by the Time Lords. Now Hyperion tombs are opening all across the cosmos, with one awakening on the very edge of the solar system – with vengeance in its heart...How can the Doctor and Clara hope to stop the fury of the Hyperions from consuming Earth?! 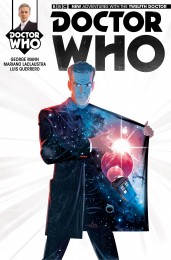 V11 Doctor Who: The Twelfth Doctor

George Mann – novelist behind the New York Times bestselling Doctor Who: Engines of War and the Newbury and Hobbes series – joins the ongoing Twelfth Doctor series for an extremely special issue and Mariano Laclaustra joins him in his first solo outing! Fresh from their adventures in Las Vegas, the Doctor and Clara are eager for a change of scenery, but their next destination aboard the TARDIS will prove a SHOCKING change of pace! And coming up next issue: post- event, the Twelfth Doctor's first year in comics concludes, with the return of a cosmic foe and a four-part epic climax to our first year by Robbie Morrison, Daniel Indro and Slamet Mujiono! 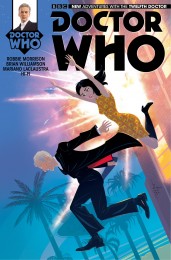 V10 Doctor Who: The Twelfth Doctor

Thrillingly explosive action on the '60s Las Vegas strip as the Doctor and Clara battle the mob AND an alien invasion force! The Doctor gambles with humanity – with the highest stakes and the longest odds! Has his morality been compromised – or has Clara's?! Sharp fashions, sharp minds – sharper weapons! 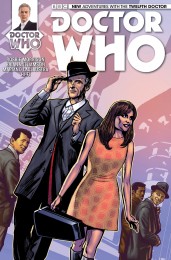 A BRAND NEW STORY begins, as the Doctor and Clara are forced to ally with gangsters on the Vegas strip to combat an even more terrifying foe! Will the Doctor's morals prove as alien as the unearthly invaders – or can he triumph without compromise... in 'GANGLAND'? Doctor Who, the Daleks, the Cybermen, TARDIS and all other characters and logos are trade marks of the BBC and are used under licence unless otherwise indicated. 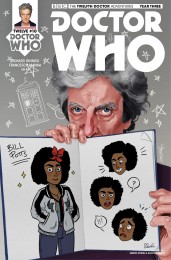 With Missy’s containment vault experiencing some technical difficulties, The Doctor, Bill and Nardole took a shopping trip for parts to one of the biggest supermarkets in the universe – the Übermarket! But when Bill found herself lost with a little girl, the TARDIS trio found out that the supermarket wasn’t all that it seemed… it was run by robots and populated with Pathicols. Now, their adventures continue… 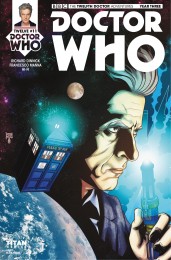 When the Doctor, Bill, and Nardole stumbled across a lost and powerless cargo ship in the middle of space, they realized that the situation on board was worse than they ever could have imagined! Transporting over five-hundred Heavenly Hosts, the crew were disappearing, and the ship’s systems were failing… Could the Hosts have malfunctioned once more… or is there something even more sinister lurking on the ship? 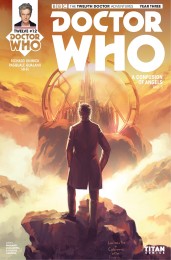 On a lost and powerless cargo ship, where the crew were disappearing one by one, the Doctor, Bill and Nardole struggled to get to the bottom of the mystery. The ship was carrying over five-hundred Heavenly Hosts as cargo – the price suspects in the case… but it soon became apparent that there was more than one enemy on this ship: some Weeping Angels were also on board! Now, Missy has stolen the TARDIS, the Doctor has been sent back in time by the Angles, and the Judoon – with the assistance of the (reformed?) Blon Fel-Fotch – have seized control of the ship. Could things get any worse? 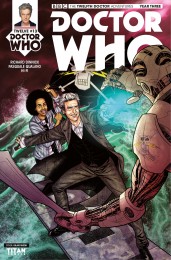 A powerless cargo ship carrying a cargo of Heavenly Hosts has been infested by Weeping Angels! The TARDIS team already have a plethora of other problems… now they must work together with the Judoon and the crew to save everyone on board from falling into a nearby sun! But even though the Doctor has been found again (after being sent back in time by the Angels), Missy has apparently stolen the TARDIS! Without his beloved ship, will the Doctor be able to get everybody to safety? 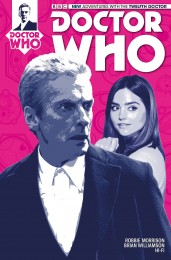 The thrilling finale of 'The Fractures’ is here – and it will get under your skin! Bursting from a twisted parallel universe and clawing their way through the void, the Fractures are here, and nothing could prepare the Doctor for their insidious assault on reality! The Doctor, Clara and UNIT must battle the Fractures, as they slip through the cracks in our world to wear the skin – and bodies – of innocent people, puppeteering them from the inside! When the war spills out of quiet suburbia and threatens the world, it will take a father and daughter – separated by whole universes – to bring the conflict to an end! Doctor Who, the Daleks, the Cybermen, TARDIS and all other characters and logos are trade marks of the BBC and are used under licence unless otherwise indicated. 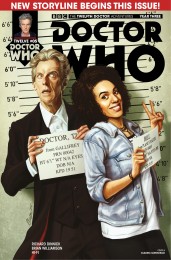 Join the Doctor and Bill Potts for an all-new adventure! 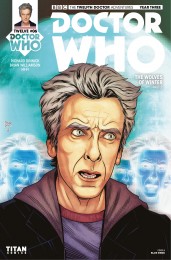 New companion Bill Potts joined the Twelfth Doctor’s comic adventures! But she got more than she bargained for when they bumped into a group of questing Vikings in the Ninth Century… Something has fallen to Earth, and is killing the Vikings one by one. The Doctor and Bill have met these invaders before, on Mars – the Ice Warriors! But these Ice Warriors have been infected by Mars’ other dominant lifeform – the sentient virus known as the Flood! 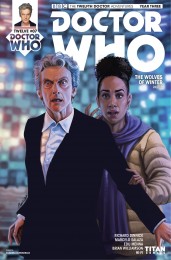 Guest starring the monstrous ice warriors, as seen in season 10! 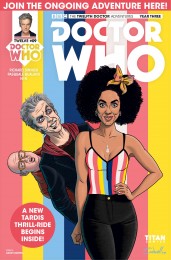 Bill’s first foray into the Twelfth Doctor’s comic adventures saw the pair caught in the middle of a stand-off between a group of Vikings and Ice Warriors, all going head to head with a sentient disease- carrying Flood. After defeating the enemy, there was little time to rest before the Doctor was thrown into another crisis which threatened his past incarnations and everyone he ever loved – the Void! Working with his previous selves, the Doctor managed to contain the proto-TARDIS which was causing the damage and save the universe! Now, his adventures continue… 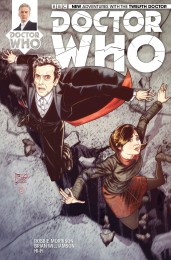 The Fractures' Part 2 On our Earth, UNIT scientist John Foster was killed in an accident... but in a parallel universe, his wife and daughter were killed, while that world’s John Foster survived. One thought kept that John going through his grief – somewhere out there, in some other reality, his wife and daughter still lived. Working obsessively, Foster has devised a way to breach the membrane of the multiverse and cross the Void into our world, unaware of the horrors that will follow in his wake… What dark creatures live in the veins of the multiverse, reaching out to ensnare those foolish enough to breach into their domain? The Doctor and Clara are about to face... The Fractures! Doctor Who, the Daleks, the Cybermen, TARDIS and all other characters and logos are trade marks of the BBC and are used under licence unless otherwise indicated. 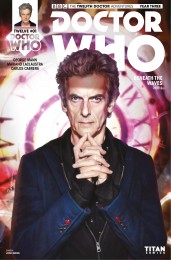 It's the start of a brand new year for the Twelfth Doctor - and a brand new adventure begins! In a sleepy seaside town, something has woken beneath the waves… 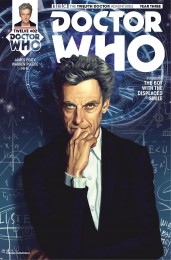 Before he can save the world from seaweed monsters, the Doctor must cast his mind back to a previous adventure... one in which an entire town was taken over by a giant smile in the sky! 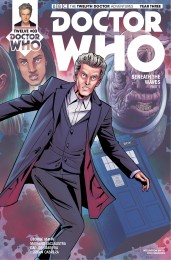 The Doctor revisited a previous adventure, where an entire town had been turned into zombie-like shells of their former selves, under the terrifying influence of a giant smile in the sky! Another enemy was defeated, with the help of the few unaffected locals – and a very brave, very lonely little boy. Now the Doctor must return his thoughts to a more pressing problem… the seaweed husk creatures attacking him and Hattie in a sleepy British seaside town! While a husk grapples with the Doctor, Hattie is pained by a psychic attack!