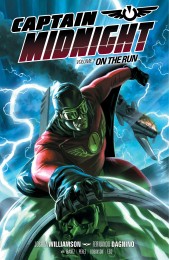 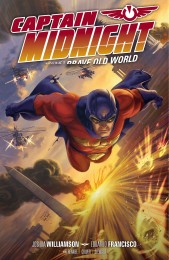 In the forties, he was an American hero, a daredevil fighter pilot, a technological genius... a superhero. And when he rifled out of the Bermuda Triangle and into the present day, he found a world rife with danger! When Captain Midnight discovers his innovative technology has been corrupted in his seventy-year absence, he rockets into action, setting a collision course with a high-flying, overzealous patriot without a conscience, and a rogue black-ops organization eager to exterminate anyone who knows their secrets! Midnight is confronted by a brave new world he's determined to make better... or die trying! 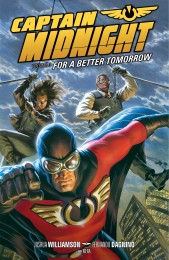 Since he traveled seventy years into the future, Captain Midnight has been busy. He's been attacked by supervillains, gone head to head with time-displaced Nazis, fought assassins, and defended himself against secret government agencies. Tired of being on the defensive, he's eager to take the fight to his enemies and learn the mysterious fate of his former sidekick.

The only thing he hasn't done, though, is slow down. And it's about to catch up with him as he storms his archnemesis's London stronghold. He's a man on a mission, but will he be able to handle the truth? 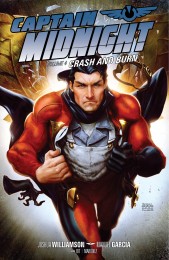 Reeling from the death of one friend and the betrayal of another, Captain Midnight ponders what the world needs more: the brawn of a superhero or the brains of his civilian identity, genius inventor Jim Albright? But the madman responsible for the assassination of Arcadia's police chief, Tempus, has escaped prison! Addicted to technology, Tempus wants Captain Midnight's inventions . . . and he'll happily kill to get them! 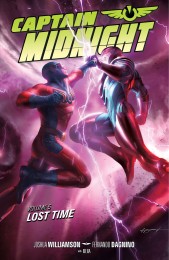 After the capture of the technovillain Tempus, it's time to rebuild the town of Nightshade, raising it up from its fiery ruin. Captain Midnight struggles to acclimate to a future that needs a hero now more than ever, but his allies are forcing his hand in an effort to track down his friend turned enemy, Chuck Ramsey--the man who killed his sidekick, Rick Marshall--which results in a battle so epic it threatens to rip a hole in our universe!