The Cold War superhero returns – originally launched in 1954 by the creators of Captain America, Joe Simon and Jack Kirby! When the 1950s heroes find themselves trapped in the modern world, how will they handle what society has become, and what dangers will they face? With new villains to contend with and enemies from their past pursuing them, what daring adventures could Fighting American and Speedboy find themselves in now? 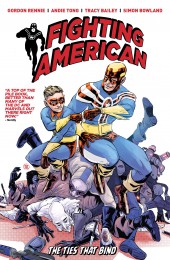 The fantastic return of Joe Simon and Jack Kirby’s legendary two- fisted super-hero, originally created back in 1954. Fighting American and Speedboy are struggling to fit into the strange new world of the 21st Century, unaware that one of their old enemies, the notorious Doubleheader, is now the secret head of the FBI and is plotting to destroy them once and for all. Then there’s the news of a long lost Grandson and Great Grandson (or should that be Nephew and Great Nephew?), a bust-up between Fighting American and Speedboy, and a ruthless TV news anchor determined to shatter FA’s all-American hero image on live TV. It’s clear to see that life’s never easy when you’re America’s only superhero! This all-new adventure, written by Gordon Rennie (Judge Dredd, Rogue Trooper, and Missionary Man) and drawn by Andie Tong (Spectacular Spider-Man, The Batman Strikes, and Tekken), sees the ultimate icon of truth, justice and the American Way bringing some much-needed two-fisted justice to a jaded cynical world of multimedia, fake news and global terrorism. Collects Fighting American #2.1-4. “A top of the pile book, better than many of the DC and Marvels out there right now.” – Nerdly “Fighting American has the whiz of classic comics with a twist you won’t want to miss.” – Adventures In Poor Taste