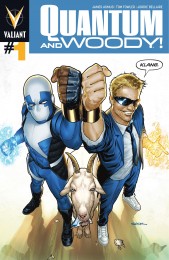 Writer James Asmus (Thief of Thieves, Gambit, The End Times of Bram & Ben) and artist Tom Fowler (Venom, Hulk: Season One) punt the world’s worst superhero team headfirst into the Valiant Universe! Once upon a time, Eric and Woody Henderson were inseparable. Adopted brothers. Best friends. Brilliant minds. Years later, they are estranged siblings, petty rivals, and washed-up failures. But when their father’s murder leads them into the throes of a life-altering scientific accident, Eric and Woody will find themselves with a whole new purpose – and a perfectly legitimate reason to wear costumes and fight crime. Go big or go home, folks! Quantum and Woody are coming! And the action-packed, zeitgeist-shredding exploitation stunt comic you demanded is here at last. (And, yes, there will be a goat too. Eventually.) 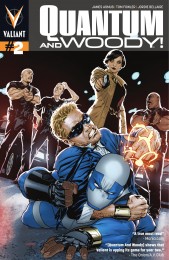 Off to a bad start! Eric and Woody Henderson have accidentally blown up their father’s life’s work – and themselves along with it! Now, as their bizarre new superpowers begin to manifest, will they be able to outmaneuver the squad of trigger-happy cops that think Eric and Woody are to blame for their dad’s murder? Plus! The mysterious cabal targeting the world’s worst superhero team only gets creepier. Seriously, it’s like an iceberg of creepy. Only 10 percent is showing! And Quantum and Woody are about to crash right the %$!@ into it! 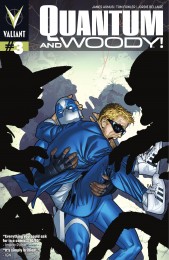 What scares you more than anything else you can imagine? WRONG. The answer is…the Nightmare Brigade! The scheming forces of the ERA will stop at nothing to unlock the secret science behind Quantum and Woody’s powers – and they’re just getting started! Plus – see what it takes to tear our boys apart – figuratively and literally! Trust us when we say that this one has TEETH. 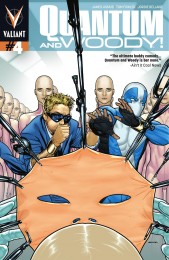 The staggering first appearance of…the Goat! Bitterly divided and hopelessly outgunned, Quantum and Woody are getting torn apart! Literally! Can they get their #$@% together before being shredded to atoms by the mysterious Crone and her super-science foot soldiers?! Probably not. But when a new ally emerges from the shadows, they’ll find the strength to fight baaaaack. 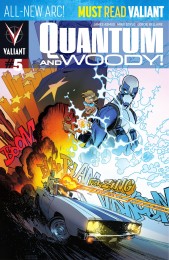 All-new arc, all-new jumping-on point! All-new…problems? Eric and Woody have had their lives turned upside down. What do you do when the most annoying person in your life is also the only thing keeping you alive? You move in with him! And his goat. And his barely legal clone girlfriend. Besides, every team of heroes needs a secret headquarters…and this one has a slightly used hot tub. Plus: Quantum meets his first true super-villain! Attention fans and retailers: Look for the Quantum and Woody Vol. 1 TPB in stores the same day! Intro priced at only $9.99! 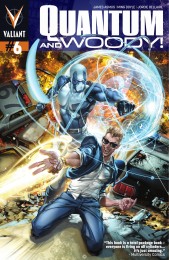 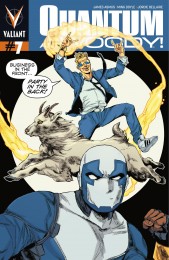 So…two superheroes, a clone, and a goat move into a junior two- bedroom… As a totally questionable romance blossoms between Woody and his runaway science experiment girlfriend, Eric finds himself quickly rising through the ranks of his new employers at Magnum Security. But when he comes to find that his duties as an on-staff superhero are bit more unsavory than he ever expected, it’s down to Quantum, an old army buddy, and Woody—interloper!—to discover the illicit truth behind Mr. Magnum’s all-seeing private security empire. 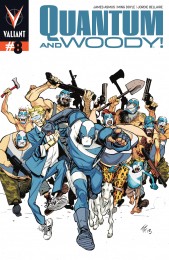 CHARGE! Quantum and Woody vs. Magnum Security…for all the marbles! Who would have suspected that Quantum’s employer Mr. Magnum and his private security firm were up to no good? So now the would-be victims of Magnum’s violence and greed rally around our unlikely heroes to protect their heavily fortified, heavily armed mountain town. These colors don’t run! 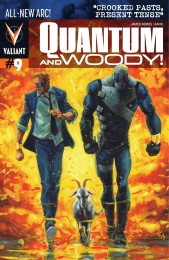 ALL-NEW ARC! START READING HERE! The world’s worst superhero team welcomes fan favorite artist Kano (Swamp Thing, Gotham Central) aboard to stop the latest scourge on the streets – ROBOTS! Eric needs to know he can trust Woody — and that means Woody needs to get a job, open a bank account, sign up for a library card, and do all the things a responsible adult does. But when a new gang of rogue mad-scientist super-criminals launch a wave of ROBO-CRIME, will Woody stop them…or join them? Plus – the return of EDISON’S RADICAL ACQUISITIONS?! 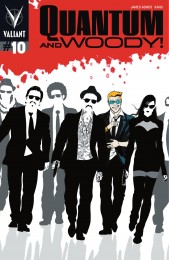 Quantum and Woody – against the world…or against each other?! Woody always had a weakness for the ladies…and when an old flame lures the goofus into a gang of mad-science super-crooks, Woody flips back to his old lawless ways! Where does this leave Woody’s sweet clone girlfriend? And now it’s up to his own brother Eric, who isn’t that sure he even wants to be a superhero, to bring Woody in! Don’t miss this bro-down for the ages! 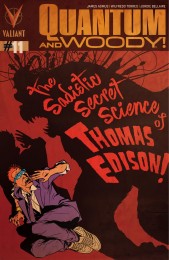 Q+W=DEAD MEAT! The mad super-scientists of Edison’s Radical Acquisitions are BACK! Well…the ones who aren’t dead, anyway. (Or the ones who were dead and…uh, came back?) WHO?! is the mysterious new leader calling the shots? And HOW?! will Quantum and Woody survive a second fight against the 1980s robots, mad vivisectionists, and evil astronomers who almost offed them the first time?! Wilfredo Torres (The Shadow: Year One) joins Team QW for this hilarious new two- parter! 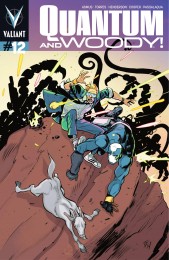 Beaten! Bloodied! Bamboozled! Quantum and Woody took the battle straight to the enemy – the mad-science cabal called Edison’s Radical Acquisitions and their mysterious, monstrous new leader – and the enemy kicked their ass! When these rogue biologists (and roboticists) get their hands (and robo-claws) on their new lab subjects, Quantum and Woody are as good as vivisected! (And, by vivisected, we mean dead.)