"This series follows the paths of two different women, in two different eras. One is the exquisite Kim Nelson, a young English woman on a quest for a treasure she believes is rightfully hers. The other is her legendary ancestor, Jade, a djinn of the utmost expertise in the art of love, who, through the power of her body, holds the whole world in the palm of her hand. Her quest? To make her mark on the memory of the world through passing into legend. But both women must withstand many trials, and many rights of passage, in order to attain their goals. This is a series constantly in movement, migrating from Turkey and the harems of the Ottoman Empire, to Africa and the magic of ritual, to India and the glittering Pavilion of Pleasures. A captivating tribute to the power of desire, sensuality and the instinct to love." 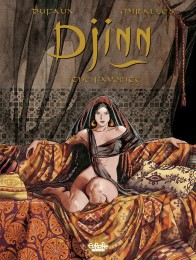 What exactly is a harem for? For the pleasure of a sovereign, of course. But he would be foolish to limit it to this sole purpose. They say that if you can satisfy a man, he'll give you all the treasures of the earth. Including the spoils of war. Sultan Murati's harem is a far more powerful weapon than the British and German armies, both of which are seeking his alliance. The flower of all flowers, the weapon of all weapons, Jade, the Sultan's new favorite, is entrusted with the Sultan's scheme to launch an assault on an English diplomat. A model of British calm and impregnability, like all men, Lord Nelson has his Achilles' heel: his wife... 50 years later, Jade's granddaughter, Kim, is trying to trace the footsteps of her fascinating ancestor in a modern Istanbul, where the harems have all but disappeared. But not the brothels, as Kim discovers at her own expense. But Kim's not just trying to find her roots. Legend has it that Jade, and Jade alone, knew where the Black Sultan hid his treasure, a treasure that no one has ever managed to unearth... 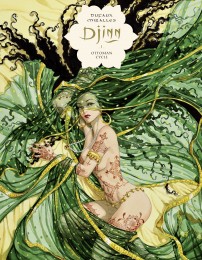 This collected edition features the first four volumes of the best-selling erotica series, as well as exclusive new content, including lavishly illustrated behind-the-scenes accounts by the authors. The series follows the paths of two different women, in two different eras. One is the exquisite Kim Nelson, a young English woman on a quest for a treasure she believes is rightfully hers. The other is her legendary ancestor Jade, a djinn of the utmost expertise in the art of love, who, through the power of her body, holds the whole world in the palm of her hand. Her quest? To make her mark on the memory of the world by passing into legend. But both women must withstand many trials in order to attain their goals. This is a series constantly in movement, migrating from Turkey and the harems of the Ottoman Empire, to Africa and the magic of ritual, and then on to India and the glittering Pavilion of Pleasures. A captivating tribute to the power of desire, sensuality, and the instinct to love. 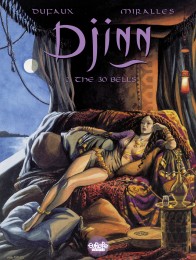 Two women, in two different times, and for two very different reasons, choose to be initiated into the harem. One is the harem of the Black Sultan in 20th century Istanbul, dominated by the captivating Jade. The other is the only remaining one of its kind, an echo of a bygone era, hidden away in the middle of the Turkish desert, far from prying eyes. Both women must carry out certain rites of passage before they can truly attain the heart of the harem. Both women are doing it for Jade. Plots and manipulation abound within those dark and sensual spaces behind the walls of the harem... 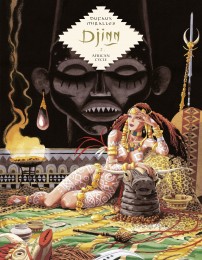 This collected edition features volumes 5 through 9 of the best-selling erotica series, as well as exclusive new content, including lavishly illustrated behind-the-scenes accounts by the authors.The second cycle of the series alternates between Englishwoman Kim Nelson in the present day, and the legendary Jade, her ancestor. Jade has become the African goddess Anaktu and aims to regain the continent's lost dignity. Meanwhile, Kim, who has become a djinn herself, prepares to face untold dangers after finding the black pearl. 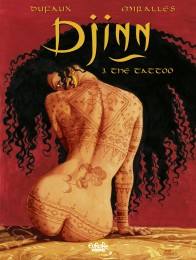 In present day Turkey, Kim Nelson continues her quest to recover the long-lost treasure of the Black Sultan to which only her captivating ancestor, Jade, the Sultan's favorite, had the key. Meanwhile, we're flung back in time to the sumptuous era of the Ottoman Empire, where Jade has been kidnapped by a certain Lord Nelson in his efforts to retrieve his wife from the depths of the Sultan's harem. It's not long before the captive falls in love with the captor, and the pair experience an unprecedented passion. Nelson's name sinks into the djinn's skin, and, for the first time, the djinn's heart begins to beat... 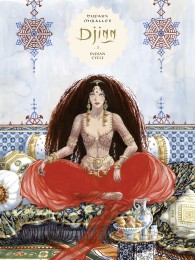 This collected edition features volumes 10 through 13 of the best-selling erotica series, as well as exclusive new content, including lavishly illustrated behind-the-scenes accounts by the authors. The third and final cycle of the series takes place in-between the events of the Ottoman and African cycles. Against a backdrop of colonial occupation, Jade and the Nelson family have been invited to India by the Rani of Eschnapur, the mother of the soon-to-be-wed maharaja. The Rani has called upon Jade to share her seductive talents with the bride-to-be—the daughter of an anti-colonialist leader—in order to bewitch and manipulate her pro-British fiancé. But Jade soon discovers that a terrible curse is menacing the palace and royal family... Discover the thrilling final chapter of a saga marked by mystery and desire. 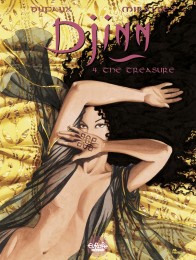 There's a treasure, long hidden, deep in the heart of the Turkish desert. All those who have tried to obtain it have never returned. But Kim Nelson, a young Englishwoman, has inherited the powers invested in her smoldering ancestor, Jade, the favorite of the last Sultan of the Ottoman Empire. These powers hold the key to a treasure that no one has ever laid eyes on. Following her escape from Turkey's last ever harem, Kim is finally ready to unlock the secret... but what's waiting for her in the depths of the desert cave isn't exactly what she was expecting... 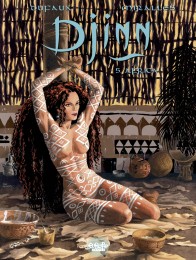 Lord Nelson, Lady Nelson and Jade continue to enjoy their ménage à trois as they travel to Africa. Their boat is savagely attacked by the natives as they go up river, deeper into the heart of this vibrant but mysterious continent. But is this just an act of pure brutality? Or is there another reason, perhaps one connected to that black pearl that Jade wears in her ear, a pearl that exactly matches that of their goddess? This is the beginning of a second cycle of the grippingly exotic adventures of Jade, the mistress of the eminent Lord and Lady Nelson. 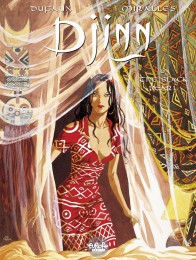 Kim Nelson, the beautiful English granddaughter of the Sultan of Istanbul's favorite courtesan, gets ever more wrapped up in the mysteries of Africa in her quest to reclaim the black pearl that is the key to her ancestor's long-hidden treasure. Like her grandmother before her, she must go through initiations of fire and flesh to prove her worth, as she gets ever nearer the coveted and powerful jewel. The problem is she's not the only one who's after it... 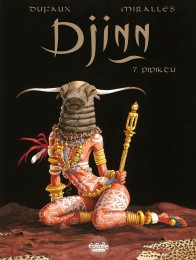 In the midst of the upheaval of an African revolution, you'll find Jade, day by day casting off the trappings of her former self and allowing the spirit of the Goddess Anaktu to consume her, propelling her into the most cruel and brutal of acts. While she accumulates power and glory as the embodiment of a goddess and the centerpiece of the continent's turmoil, those who she once loved are driven along the paths that will lead them to their downfall. 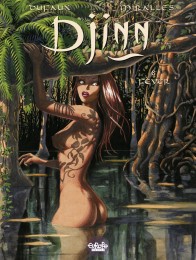 Africa is becoming increasingly volatile, with the black population rallying in the wake of the goddess Anaktu, embodied by Jade. But Jade has started to resist Anaktu's hold on her mind and body, finally remembering her past and the ones that she once loved. It's too late now to save them, but she will have her revenge. In the same place, but another time, Kim Nelson pursues her quest for the treasure that is rightfully hers, seeking the rare wisdom of prophets and submitting to ever more haunting visions of a past that is not her own. 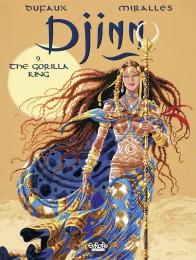 The Africa cycle comes to a close with this ninth volume of the Djinn series. Kim Nelson finally finds the black pearl of Anaktu and Jade fulfills her destiny by uniting with the legendary Gorilla King in order to create a force strong enough to lead the tribes for years to come. Travel, magic, romance and poison all combine in this gripping and sensual adventure. 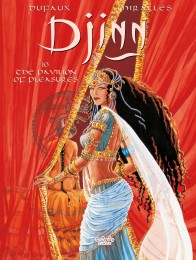 This is the first episode of a whole new cycle that chronologically takes place between the Ottoman and African cycles. This time we're swept off to colonial India. Jade, accompanied by Lord and Lady Nelson, arrives at the Palace of Eschinapur, having been summoned by the Rani, mother of the Maharajah. The Rani wishes for Jade to initiate the future bride of the young Maharajah, the daughter of the rebel Radjah Sing, to the art of love. This is in the hopes that the young bride will be able to wield this power to influence her son's politics, which are currently in favor of British rule. But there appears to be a strange presence in the palace. That presence turns out to be a child, who shows herself to no one but... the Djinn... 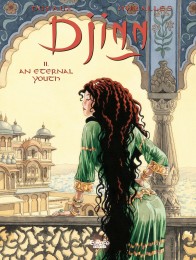 Within the cool walls of the pavilion of pleasures, Jade instructs Tamila how to use her body to captivate a man. The man in question is the Maharajah and Tamila is the daughter of Raja Singh, a revolutionary who will stop at nothing to chase the English out of India. The more she becomes implicated in the politics of the country, the more dangerous Jade's games become... she finds herself having to watch her back... 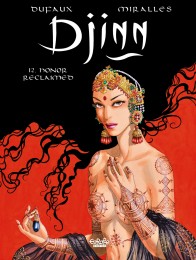 While the subtle games of power, sex and manipulation continue within the palace of Echinapur, the spirit of revolt amongst the townspeople with regard to the English presence comes into full force, suddenly and brutally. Meanwhile, we discover a new and unexpected side to the Maharajah himself, who at last assumes his responsibilities, winning his honor in the eyes of those closest to him. It all comes down to a bloody struggle between the English and the locals, but who will be victorious? 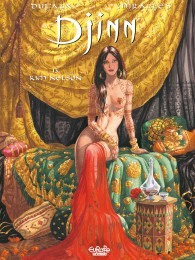 Here, at long last, is the thirteenth and final volume of the epic Djinn series. We'll finally discover the circumstances that lead Kim Nelson from India to Africa and back again, back to the cursed child princess of Eschinapur, to fulfill a vow made by the elusive Djinn, Jade. Kim truly comes into her own, assuming her power as a temptress in the name of justice and vengeance... vengeance always cruel, but always sweet...