Gail Simone (BATGIRL, BIRDS OF PREY) gives the iconic fantasy heroine a fresh new attitude! Red Sonja, the She- Devil with a Sword, intends to pay back a blood debt owed to the one man who has gained her respect... even if it means leading a doomed army to their certain deaths! Who is Dark Annisia, and how has this fearsome warrior accomplished what no god nor demon has been able to do: force Sonja to her knees in surrender? An epic tale of blood, lust, and vengeance, "Queen of Plagues" takes Red Sonja from the depths of her own grave to the heights of battlefield glory. COLLECTION FEATURES: • Issues 1-6 of the critically-acclaimed series by GAIL SIMONE (BATGIRL, BIRDS OF PREY) and WALTER GEOVANI (PROPHECY). • An introduction by GAIL SIMONE • Gail Simone's original script to RED SONJA #1 • All of the beautiful covers by the top female artists in the comic book industry including: JENNY FRISON (ANGEL), NICOLA SCOTT (TEEN TITANS, SECRET SIX), AMANDA CONNER (BEFORE WATCHMEN: SILK SPECTRE), FIONA STAPLES (SAGA), PIA GUERRA (Y: THE LAST MAN), MING DOYLE (MARA), and MANY MORE! 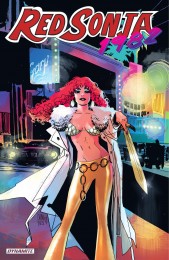 A mysterious killer android from the future hunts the legendary mercenary from the past. A.I. meets magic in a story that takes us -- where else? -- Hollywood, Beverly Hills, and the City of Angels! Amy Chu returns to pen this gnarly one and done action-filled issue that will totally take you back to the Summer of 1982...It’s an epic struggle between good and evil, mohawks and perms, New Wave and Heavy Metal! 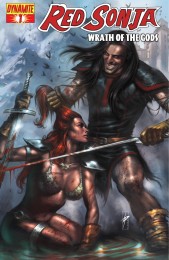 While the adventures of Queen Sonja continue to thrill and amaze readers both new and old, follow the She-Devil with a Sword in a classic tale of the primordial gods themselves as Red Sonja faces the 'Wrath of the Gods.' Written by Luke Leiberman and Ethan Ryker, featuring the returning art of Walter (RED SONJA) Geovani, WRATH OF THE GODS explores the mysteries of Sonja's past, while presenting her with the malicious threat of Loki in the present! Can Thor, the God of Thunder, and Odin, the All-Father, aid the warrior woman and prevent their fellow god from destroying the very world? Featuring a fully-painted cover by Lucio Parrillo. 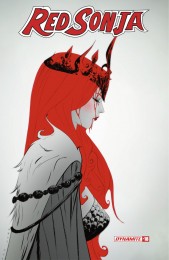 “A Children’s Crusade.” Hyrkania’s food stores are empty. The king of Khitai has the ability to save them, but he will not. But what he has not considered, is that to save her people, Sonja The Red will do ANYTHING. Year Two continues, by MARK RUSSELL (DC’s Year Of The Villain) and BOB Q (Captain America). 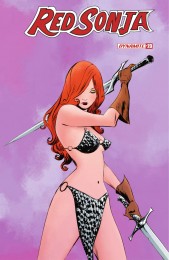 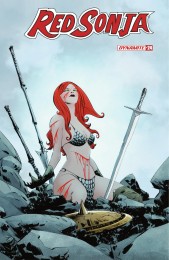 Mark Russell’s epic run on Red Sonja comes to a close. Sonja The Red’s reign is tested as never before, and will set the stage for a new tale, in next month’s Red Sonja #25… 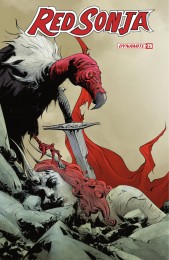 Special 25th Issue! New creative team! It has been generations since the end of Sonja The Red’s travails. A Barren, reflecting on her life, will undertake a quest that will force the past to become undead. By LUKE LIEBERMAN (Red Sonja: Birth Of The She-Devil) and DREW MOSS (Vampirella/Red Sonja). 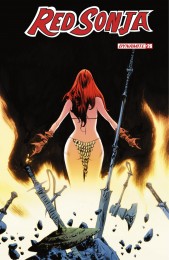 Ten years have passed. Sonja is uninterested in battle…she’d rather eat meat and drink ale. But The Red’s hand will be forced, and she will answer the call to battle. By LUKE LIEBERMAN (Red Sonja: The Price Of Blood) and DREW MOSS (Vampirella/Red Sonja). 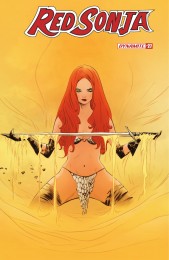 Red Sonja marches on, as their flagship title heads into bold, uncharted waters! Sonja does what she never wanted to do: She fights. By LUKE LIEBERMAN (Red Sonja: The Price Of Blood) and DREW MOSS (Vampirella/Red Sonja). 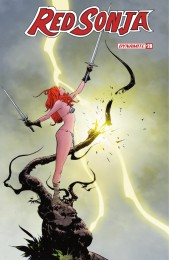 Red Sonja and the Barren’s journey comes to its conclusion. Sonja’s reluctance to do battle has been stripped away. Woe be the dead men who step in her path. From LUKE LIEBERMAN (Red Sonja: Price Of Blood) and DREW MOSS (Vampirella/Red Sonja). 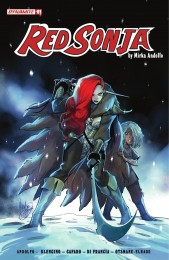 MOTHER, PART ONE. Industry icon MIRKA ANDOLFO presents an all-new vision for the She-Devil With A Sword, in a thrilling new ongoing series! Our story begins in a village on fire, set by members of the dreaded Three-Eyed Shezem. When Red Sonja arrives, the only survivor of the flame is a lively child with curious white tattoos. The child will become Sonja’s travel companion, on a journey from hardened ice to imposing forests, where dangerous secrets wait to be revealed… Begin a trailblazing adventure with MIRKA ANDOLFO (Unnatural, Mercy) and incredible artist GIUSEPPE CAFARO (Suicide Squad)! Neapolitan artist and writer, Mirka Andolfo is one of the most complete and eclectic Italian creators in the international field. Her Mercy series was published almost simultaneously in Italy (November 2019, Panini Comics), France (January 2020, Éditions Glénat) and United States (March 2020, Image Comics). Her ControNatura (Panini Comics) is one of the most successful Italian series of the last few years. Published in the USA by Image Comics under the title Unnatural, it’s a best-selling hit with several reprints already. Andolfo has been collaborating with DC Comics since 2015, having lent her pencils to such titles as Wonder Woman, Harley Quinn, Catwoman, Bombshells, Teen Titans, Green Arrow, R.W.B.Y. and Hex Wives. Also as an artist, she’s drawn comics for Dynamite and Aspen, as well as some short stories for Vertigo and DC’s Young Animal, and she’s working on covers for DC Comics, Marvel Comics, Valiant, BOOM! Studios, Aspen, Zenescope. 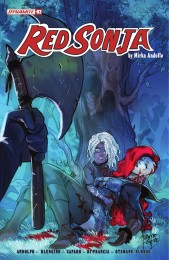 MOTHER, PART TWO. Sonja struggles to recover from injuries, relying on SITHA to help her. Their bond grows, as they travel from city to hamlet, and as Sonja discovers more about Sitha’s past, the more dangerous their path becomes… The ongoing adventures continue, from MIRKA ANDOLFO (Sweet Paprika) and GIUSEPPE CAFARO (Sacred Six)! 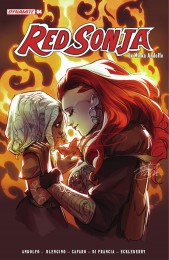 MOTHER, PART FOUR. The marauders of Shezem will have their blood. They will capture the She-Devil and the young Sitha, whose power has become extraordinary. Sitha’s revenge will manifest in ways that not even Red Sonja will be able to contain… The ongoing adventures continue, from MIRKA ANDOLFO (Sweet Paprika) and GIUSEPPE CAFARO (Sacred Six)! 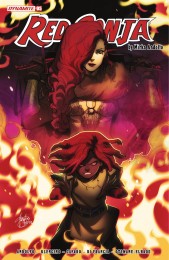 MOTHER, PART FIVE. It has been a long journey east to the kingdom of Vindhya. Here is the sanctuary of the Vestals of Xamul, a demigod who lives in the heart of a volcano. In this place, Sonja and the gifted child she protects, seek something very special. The ongoing adventures continue, from MIRKA ANDOLFO (Sweet Paprika) and GIUSEPPE CAFARO (Sacred Six)! 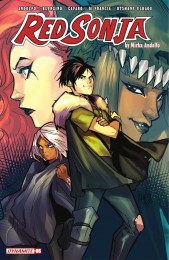 MOTHER, PART SIX. THE DAUGHTER OF FIRE emerges! Every generation, a spirit embodies itself within a vestal, bestowing divine powers to the host. Red Sonja must quickly choose whether to save or destroy the host, and her decision will create a an entirely new path forward... The ongoing adventures continue, from MIRKA ANDOLFO (Sweet Paprika) and GIUSEPPE CAFARO (Sacred Six)! 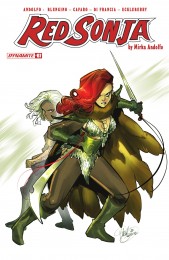 New arc, new jumping-on point for readers! The adventures of Red Sonja and Sitha in a world full of threats and dangers have only just begun. Now the bond between the two has become deeper and more special, but are their problems really solved? A new, deadly threat looms, and the mother/daughter connection may not be enough to quell the evil ahead and the power within… 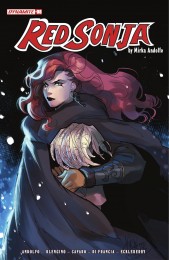 As a new, deadly threat comes fuller into focus, the schism between Red Sitha and Red Sonja widens. Their connection dims. Sitha’s penchant for violence, her inability to keep her demons at bay, are soon to lead to a confrontation, with only one surviving… 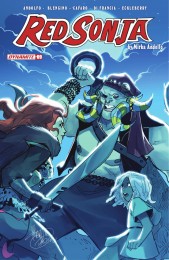 After rescuing her from the gang of the ferocious Three-Eyes Shezem and realizing how dangerous the dormant power inside her can be, Red Sonja vows to never part with Sitha...until she brings her back to her real family. The little girl seems to come from a mysterious village hidden on the peaks of distant Kithai, a place where only women can access…but the road to reach that remote kingdom is long and full of dangers. The first is the Feud of the Seven Capestri, where the she-devil with the sword will be taken prisoner by the cruel Baroness Drang... 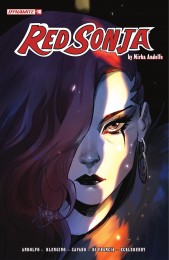 Leaving the Isle of Crimson Sands, Sonja and Sitha travel the last part of the journey and reach their final destination...the remote village on the edge of Kathai, where Sitha was born...and where only women can access! 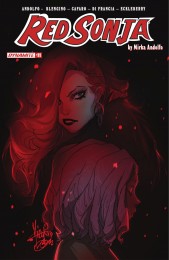 TO SAVE THE UNIVERSE, NYX MUST KILL HER DEMONIC BROTHER! Nyx has been trying to save her siblings from the genetic curse of their demonic and human sides — a curse that could cause their utter destruction! But now a crisis looms as her brother, Unison, comes into his cosmic powers and threatens to consume all of reality! Nyx must team up with her partners from the swinging ‘70s — the Vampirella and Pantha of that far-out era — to stop the end of everything. But if it comes down to it, can she kill her own brother? She’ll have to if she’s going to save the universe itself! 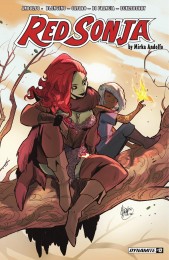 RED SONJA MUST PREPARE FOR THE FINAL BATTLE FOR THE LIFE OF RED SITHA! The demon Xamul is free at last, and the High Priestess of the cult is determined to harness her power. And in this final chapter, Red Sonja prepares to face the last battle for Sitha’s life!